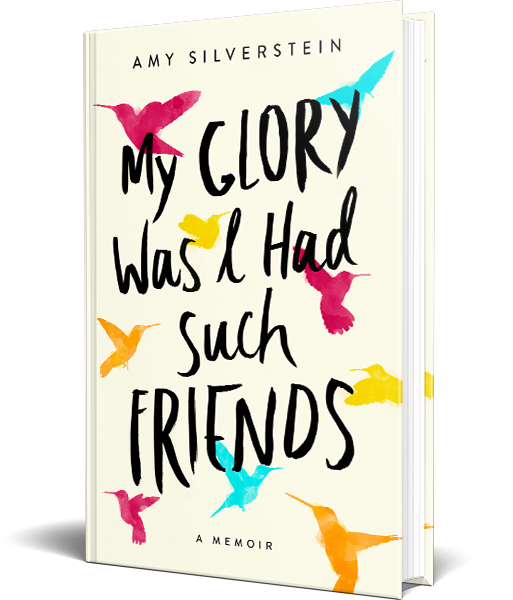 In the winter of 2014, nearly twenty-six years after receiving her first transplanted heart, a heart that was given a prognosis of only ten years by even the most optimistic of doctors, Amy Silverstein’s steadfast heart finally gave up. When her doctors informed her that survival depended on immediately moving across the country to take on the grueling quest for a matching donor heart, Amy’s friends, who had watched her in amazement as she willfully defied the odds year after year, put demanding jobs and pressing family obligations on hold and followed her, in a constant rotation, to a hospital room in California to sit by her bedside.

Empowered by the kind of empathy that can only grow with age, these women, each knowing Amy from different stages of her life, banded together keep their dying friend afloat. Creating a calendar spreadsheet, the women—some of them strangers to one another—passed the baton of friendship, one to the next, and rolled up their sleeves to work a miracle. Sleeping on a cot beside her bed, they rubbed her back and feet when the pain was unbearable, adorned her room with death-distracting decorations and engaged in their “best talks ever.” They saw the true measure of their friend’s strength, and they each responded in kind.

Amy’s tale is a tribute to her women friends and the intense hours they spent together—hours of heightened emotion and self-awareness, where everything was laid bare. Candid and heartrending, this once-in-a-lifetime story of connection and empathy is a powerful reminder of the importance of “showing up” for those we love.

“Memoirs written by people who have survived devastating health issues are common, as are books that celebrate the friend who is an angel-like presence in tough times. My Glory Was I Had Such Friends combines both elements, but in far better fashion than the standard-issue memoir or the typical homage to girlfriends…A potent reminder of the importance of imperfect friends, for loving them for whoever they are…Silverstein proved her writing mettle…She seamlessly knits several important issues into one compelling package.”
—USA Today (3.5/4 stars) (read the full review)

“My Glory Was I Had Such Friends is, at its core, a book about friendship. Silverstein spares no words honestly describing the endless emotions she felt when friends from work, childhood and her community walked alongside her as she waited for a heart…As different as these friends were, they all had common goals that brought them together: a love for Amy and a desperate desire for her to get a new heart. As a result, friendships deepened in courage and perseverance, and a new understanding was born for what it means to say, ‘I’m there’—and truly mean it.”
—Associated Press

“An inspiring, heart-warming memoir… Amazing… You can wait for the movie or grab some hankies and start crying now.”
—Huffington Post

“Friendship is a key element to a happy life and, as Amy Silverstein’s moving memoir demonstrates, friends matter even more when we’re facing a big challenge. Nine remarkable friends helped Amy to survive while she waited for a life-saving heart transplant. This riveting account of what Amy endured—and how her friends supported her—illuminates the power of friendship, for all of us.”
—Gretchen Rubin, New York Times bestselling author of The Happiness Project and Better Than Before

“If it were fiction, you’d dismiss it as over the top: Multiple devoted women collaborating in an emotional, cross-country support relay, struggling to keep an exhausted friend alive—a friend who is focused and willing to undergo yet another heart transplant. An endless wait leads to a medical miracle that makes it all worthwhile. But here’s the kicker: It’s all true, and it’s beautifully written, too.”
—Ted Koppel, author of the New York Times bestseller Lights Out

“There’s a special air around crisis that makes true intimacy possible in ways that daily life rarely does. Amy Silverstein has tapped into that moment with a cast of women who will make you pine for your nearest and dearest.”
—Kelly Corrigan, author of the New York Times bestsellers The Middle Place and Glitter and Glue

“A tremendously moving story about the power of female friendship—the incredible way our bonds deepen with age, and a gentle reminder to all of us how important it is to show up for those we love. There is no doubt that readers will recognize their own ‘friend circles’ in these pages and feel a new appreciation for the many miles they’ve walked together.”
—Kathleen Grissom, bestselling author of The Kitchen House and Glory Over Everything

We were grown daughters all, some mothers of high school or college kids, a few of us seasoned career women. We had become our middle-aged selves—our wisest, steadiest, most powerful selves yet. And we discovered a new best in ourselves together because I was dying, really dying this time, and we weren’t twenty-five anymore.

I had been ill back then too. Shockingly ill. But in our midtwenties, we had not yet become fully formed women. Still emerging into adult-hood, we easily turned as moody and flip as self-interested teenagers. Our focus was on dating or setting up newly married lives, finding our way at first jobs or completing graduate school. We floated above small troubles, giggling arm in arm through parties and bars that kept us out late into the New York City night. We invested more in great shoes and best-fit jeans than in how to rise up for a friend who needed some kind of crazy surgery we could not begin to understand.

Our empathy had not ripened at twenty-five. At fifty, it had.

So in the winter of 2014, when a doctor said that my transplanted heart was in precarious failure, my friends paused their lives and rallied around me. When I was told my best shot at retransplant depended on my husband, Scott, and me moving immediately from our house in New York to a hospital room in California, friends followed in constant rotation—abandoning must-do responsibilities that left husbands scrambling, bosses irritated, and teenagers unsupervised by the crucial mothering eye.

A spreadsheet appeared, and friends signed on for three- or four-day blocks, some for multiple visits, filling every calendar space for March, April, and May so that each woman could pass the baton seamlessly from one to the next. They booked plane reservations for cross-country flights, looking for bargains and counting up frequent-flyer miles, hoping for the best but paying full price if that was what it took to ensure that I would never have to spend a night without one of them there.

When I woke again and again in the darkness of that hospital room so far from home, engulfed by what felt like a literal heart on fire that scorched a line of breath-stopping pain from shoulder to shoulder, my friends threw their arms toward me from where they slept on a low cot beside my hospital bed. So exhausted, these angel women, barely able to keep their heavy eyes open as they reached under my pajama top and swept their fingertips across my trembling back—at midnight, two in the morning, four thirty, and again at five. And that was on a good night.

Jill, my closest friend since the second grade, usually so perky and tireless in spite of a demanding job in advertising sales and two young kids, now bleary-eyed and slumped, hair gathered on her head in a pineapple-top ponytail. Lovely Jane, my go-to style guru who never seemed to mind my copycat attempts—Tell me where you got those boots! What’s the name of that lipstick?—at once turned hospital drab in frayed sweatpants, her perfectly arched brows collapsed under worry weight. Lauren, the ever-meticulous mother of three and my stalwart escort to many of the surgeries, procedures, and scary medical tests that came along with my decades of heart transplant life, transformed by this California hospital stay into a cautious half-sleeping night owl in case she had to run and grab a nurse, flailing for her glasses at the faintest sound of my recurring whimper, “The pain . . . it’s coming again . . .” Val, all steadiness and serenity even as my roommate during our grueling first year of law school, suddenly under extreme stress mixed with oncoming menopause—sweltering, self-spritzing frenetically with the spray bottle-fan combo she had brought with her all the way from Durham. And Ann, my hippie sister-in-law in platform flip-flops, her Mother Earth smile surrendering to tautened lips, wordless, just holding my hand.

Rougher than I had ever seen them, these five friends—along with four others—cared for me until the sun came up, showered quickly, if at all, and got right back to my bedside, cheerful and energetic. They pulled surprise gifts from their suitcases, anything to help me get through another day: buttery flannel pajamas with puppy-face print, peppermint lip gloss, lavender spray, a mud mask for two that transformed the hospital bed to a spa chaise one night. And then there were the rubber chickens and feather boas tacked to the wall, purple peace signs and Hawaiian leis hanging from the window shades—all purchased and arranged by Joy, my friend with a high-powered, executive-level job in Washington, DC, and yet also the one who flew to California to sleep beside me more nights than anyone else, always with a bag of new decorations to outdo the old, intent on transforming my room into its most ridiculous, death-distracting state.

But more than the tending and diverting, there was conversation—our best talks yet. No filters. Last-chance candor. It was a time and place for unfastening. We got serious. Turned silly. Came clean. Worried. Mused. Raged. Laughed. Our honesty soared with purposeful abandon, answering a call of necessity that challenged each of us: If not now, when? We dove into truths and discoveries about ourselves, our husbands, our children, and our group of friends that lit the space around us to shimmering, no matter how alarming the signs that time was running out on my heart. Suspended in this desperately enchanted bubble, we found a new way to talk about life.

And when death did come up, in what were the frankest conversations of all, it was clear that no friend wanted me to die on her watch.

But neither did she want it to happen when she was not by my side. Intense hours were spent together over the span of two and a half months—friend to friend, with unprecedented privacy for long stretches during the day and late into the night, and the sense that time was so short we absolutely could not delay going deep and learning from one another. Because, after all, every time one of these women left my California hospital room and flew home, she assumed she might never see me again.

This is the story of what that assumption brought out in each of us: our finest yet.

The result was transcendent.