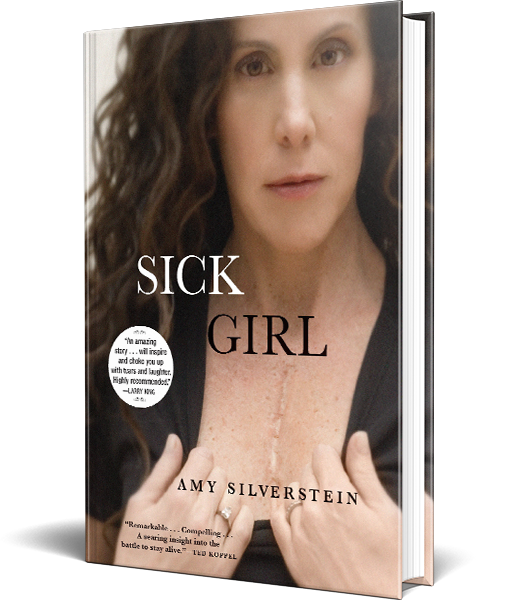 Beginning with the onset of her symptoms when she was twenty-four years old, Sick Girl chronicles Amy’s “crazy kind of amazing” medical miracle, a journey of over two decades, from the first misdiagnosis to her astonishing ongoing life after heart transplant, despite a ten-year post-surgery life expectancy. With grace and wit, Silverstein chronicles her astounding medical journey.

“What happened to me demonstrates that there are illnesses that can outsmart and out-perform even the best doctor gods,” writes Silverstein in her riveting, keenly observed, wryly humorous look at a full-throttle life-threatening disease.

Told she is a “sick girl” by her physician, Silverstein makes every effort to live as a “normal” person, despite a precarious state of survival as well as must-take, toxic immunosuppressive medicines that keep her body from attacking her new heart. Her remarkable account is made all the more dramatic by the deliriously romantic bedside courtship with her devoted boyfriend, Scott (now her husband), and a single, uncompromising desire to be together.

Written with force and honesty, Amy’s gripping and provocative book presents a patient’s perspective that allows the reader to live the extraordinary, utterly honest story alongside her—an unforgettable experience.

“Silverstein’s autobiography draws readers inside her mesmeric human drama of living life as a heart transplant recipient. Make no mistake: the author, an Ivy League-trained lawyer and superb writer with a wry, biting sense of humor, immediately debunks preconceptions about a transplanted heart as a ‘cure’ for a failed one. Silverstein is a natural raconteur with a story so compelling readers won’t want to put this book down.”
—Library Journal, starred review

“Amy Silverstein is not an easy patient, with good reason. She has lived nineteen long years with a transplanted heart; much longer than any doctor could have predicted. And she has, arguably, done more with a transplanted heart than anyone else, including the publication of this remarkable book. It documents her fears, frustrations, anger and perseverance. She recognizes that the world expects a simpering bundle of gratitude. In her compelling memoir, Sick Girl, Amy delivers a searing insight into the arduous and often depressing battle to stay alive. And yet, there is also love and humor, and a radiant courage.”
—Ted Koppel

“Spectacular…Heart transplant patients live along the jagged edges of the abyss that most mortals fear. By bravely peeking over the edge, Amy Silverstein shares with us the brutal reality of being a ‘survivor.'”
—Dr. Mehmet Oz